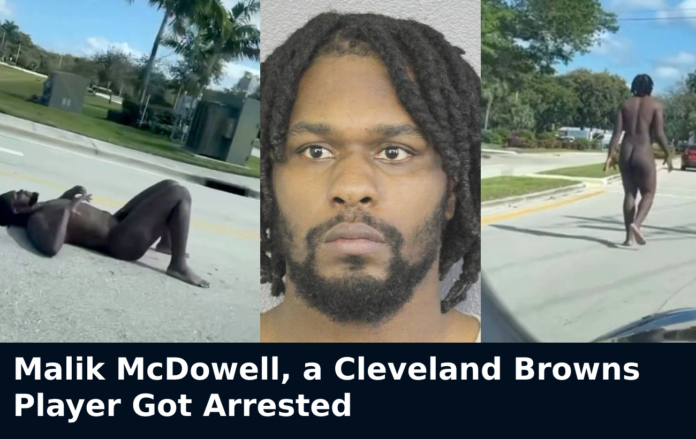 According to an incident report on the 17th of January 2022, Malik McDowell, a Cleveland Browns defensive player, was charged with public exposure, the battery of a law enforcement officer, and obstruction of justice by violence for resisting arrest.

Based on the report, a Broward County deputy responded to a report that a naked man was walking near Deerfield Beach school. McDowell looked at the deputy, yelling an expletive.

According to the officer, he could not avoid the attack due to his proximity or use de-escalation tactics and a non-lethal weapon.
According to the report, the officer stated that the defendant deliberately rammed his body into my head and started swinging closed fist strikes at me. “The punches were delivered with extreme aggression, with at least one strike striking me in the right eye/temple region of my eye.”

Based on the officer’s statement, he felt severe hurt and was in a daze after being struck by Malik McDowell. He also said that he continued his “violent attack” with strikes to the top of the head.

McDowell fled, and after a foot chase, a Taser he was used to disarm him. According to the report, McDowell was taken into custody and handcuffed.

McDowell was also charged with aggravated battery against a law enforcement officers and obstruction of justice by violence. He is also accused of exposure for “the defendant walking around naked, exposing his sexual organs to the public — including a school that contained kids.”

Court documents show that bond was set at $31,000 for each of the three charges.

How I Met Your Father VS How...

When We Were Young Festival Headline With...

How I Met Your Father VS How I Met...