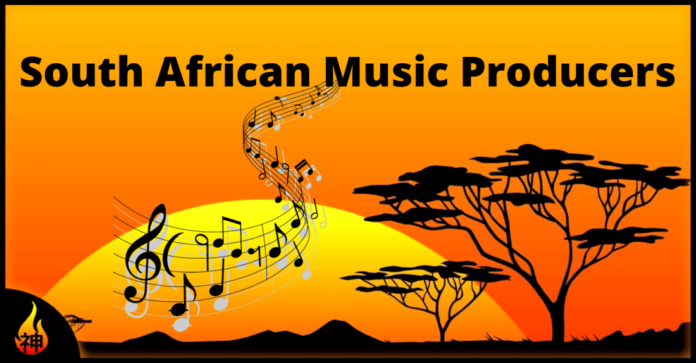 So, we will be exploring the best South African record producers 2021 – 2022 by their achievements and world recognition.

She has had many international award nominations. In 2009, Mail & Guardian nominated her as one of the 300 “Young South African You Have to Take to Lunch.”

In 2014, Bona Magazine named her one of 10 of SA’s Most Influential Women, and she has done great work by inspiring so many women.

Mthokozisi Khathi, popularly known by his stage name DJ Tira, is a South African DJ, record producer, and Kwaito artist. He was born in Hlabisa, South Africa, on 24 August 1976 (45 years). He is the founder and CEO of Afrotainment.

Afrotainment is a prestigious record label in the heart of South Africa. He’s popularly known for his great work of introducing artists to the industry. In 2000 he won the Smirnoff SA DJ Knockout competition with Mthokozisi Mbatha from Hlabisa. DJ Tira had multiple awards, which elevated him to our list of the top producers in South Africa at this time.

Refiloe Maele Phoolo, popularly known as Cassper Nyovest, is a South African rapper, songwriter, entrepreneur, and record producer. He is also a Brand Ambassador for CIROC and Samsung Mobile SA. He was born on 16 December 1990 (30 years).

He got raised in Mahikeng, North West South Africa. He is one of the most successful artists in South Africa.

In 2014, Cassper established his record label “Family Tree Records.” Cassper has won so many awards, including Hustler of the Year.

Thandi Donnell, popularly known as Shekhinah, is a South Africa singer, songwriter, and music procedure. Shekhinah is from Durban, South Africa. She was born on 2 October 1994 (27 years).

Jarryd Forbes, popularly known by his stage name, AKA, is a South African rapper, singer, songwriter, record producer, and entrepreneur. AKA was born and raised in Cape Town, Western Cape, South Africa.

AKA is fast becoming the best producer in South Africa and Africa at large. He is also among the wealthiest South African artists with a net worth of 12 million dollars. The rapper became famous worldwide after making a single titled “Victory Lap,” which got dropped in 2011 from his debut studio album “Altar Ego.“

He has collaborated with many international artists, including Burna Boy. AKA has won 15 awards, including the 26th South African Music Awards for Music Video of the Year. Aka is currently rated one of the best South African producers and artists.

Kabelo Petrus Motha, popularly known by his stage name, Kabza De Small, and the king of Amapiano, is a South African DJ, record producer, and Artist. He was born on 27 November 1992 (28 years) in Mpumalanga and raised in Pretoria, South Africa.

Coffee has been a well-known producer since 2007 and has gotten massive recognition across South Africa with tribal and vocal-laced beats when he released his second album entitled ”Have Another One” in 2007.

He featured “Wathula Nje”—a Remix of Victor Ntoni’s 2004 jazz ballad “Thetha. “Wathula Nje” was later released along with “Even Though” featuring Bantu Soul in Europe through a European label Realtone Records on vinyl and digitally. Black Coffee is one of the best producers in South Africa.

He was born on 11 February 1997 (25 years). Nasty C started his music career early and became one of the most celebrated rappers in South Africa at only 22 years.

The producer has an older brother called Siyabonga Ngcobo, who is also in the music industry as a producer. He got listed among the highest-earning rappers in South Africa for 2018/2019.

Nasty C’s currently approximated net worth of $330,000 is calculated based on his assets and holdings, which he earned through, private businesses, music, and endorsement deals in South Africa and globally.

This South African music star’s incredible talent is loved and appreciated by fans worldwide. Since 2018, Nasty C has ascended to become one of the most flourishing musicians and producers with multiple awards. He has also got nominated for best BET international act.

DJ Maphorisa is half-cast with a Nigerian father and a South African mother. He speaks Swahili and English language fluently. He is 34 years of age, was born on 15 November 1987.

DJ Maphorisa became globally recognized in 2013 after he co-released Mafikizolo’s Khona. He then dropped another hit single, “The Sound,” with a Nigerian and international singer, Davido.

Since 2013, DJ Maphorisa has maintained an excellent record of consistency in the music industry. He has worked with many famous and Award-winning musicians, including Wizkid, Davido, Kwesta, Uhuru, Drake, Black Coffee, Major Lazer, Runtown, C4 Pedro, TRESOR, and Kabza De.

The present estimation of DJ Maphorisa’s net worth is approximately $5600,000. And he is currently among the trending DJs and best music producers in South Africa and Africa at large.

Kgaogelo Moagi, known professionally as Master KG, is a South African musician, Record Producer, and Hitmaker. He was born on 31 January 1996. Currently 25 years of age. He got raised in Tzaneen, Limpopo province in South Africa.

His debut studio album titled Skeleton Move, in which he featured Zanda Zakuza, a South African songstress, on 29 June 2018 got him heavy global recognition. Skeleton Move trended massively from the day it got released in 2019.

The single won many awards, including an AFRIMA Award for Best Artist/Group in the African Electro category. Master KG is also known as the pioneer of “Bolobedu” dance.

His second studio album Jerusalem hit 2020 and went viral internationally and on the internet. Single: “Jerusalema,” featuring Nomcebo Zikode and Burna Boy, was certified diamond by FRA and the KZN in 2020. Master KG is top recognized and well-known producer in South Africa

Because of his massive accomplishments and success, we have decided to make him number one on this list of top 10 South African music producers.

Master KG is undoubtfully among the wealthiest, youngest, and prosperous South African Musicians, with an estimated net worth of $190,000.

Those are the current lists of the top 10 South African music producers in 2022. We will keep updating the list as new changes emerge. Meanwhile, you can read also; about Davido’s Biography and Net Worth 2022, How to Become a Successful Music Artist in New York, or Taylor Swift Biography, Awards, And Net Worth.

Easy Ways To Download Music On Your Android Phone...